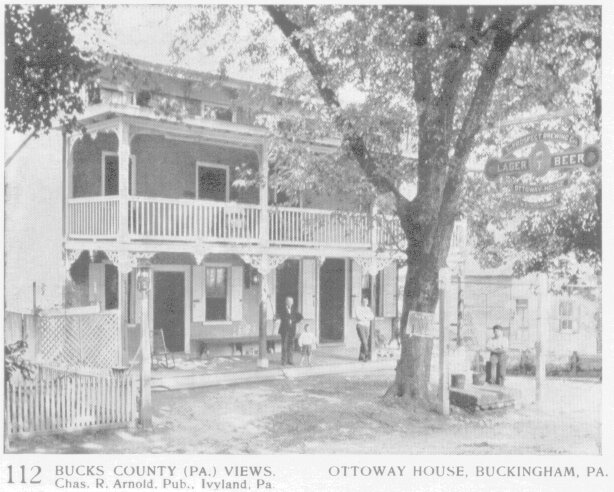 On the map (Map of Centerville ), the current day Bogart's Tavern Road is labeled with "Pike" only. Buckingham-Doylestown where shown above and cut off. At this time, Bogart's Tavern Road still connects with Durham Road, a few feet from the intersection with York Road, but was cut off from Route 202 when the road was widened and leveled with surrounding areas.
The building was built as a private residence somewhere in the early 1800s. I didn't go as far as checking deeds. The tavern licenses do not show addresses during this time period, only the owners name and town.

1860 Boyd's Bucks County Business Directory lists Wm. Corson as proprietor 1871-2 Boyd's lists Peter L. Righter 1905-6 Bucks Dir. John R. Righter W. Herman Bisbing owned it from about 1913 to 1933 when he passed away in December. After Bisbing, a Doylestown Bank took control, probably from his estate and then sold it to Mr. William Buckley. Buckley was in the process of remodeling the building and had the opening date set for March 1, 1936. The building burned down on Feb. 13, 1936.

From the book "A Stroll Through 19th Century Buckingham", page number 73 reads;

"The hotel of the Righters, art Centreville, is an old hostelry. Early memory connects Col. Wilkinson with its proprietor. He was a prominent in politics and the militia organizations of the day, and had an eye to a running horse as well. It has had many proprietors since then. Willitts, Thatcher, Vansant and genial Corson and others are remembered, but it was shorn of its glory when the railroads supplanted the "Swift-Sure Stage Line" and reduced it from a place of public entertainment to a neighborhood accommodation."

In the BCHS Papers, Vol. 5, page 336 does give mention to Ott's Hotel when talking of a band of Gypsies passing through town. No real details were given.