Southampton was organized in 1703. 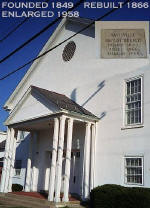 In the proceedings of the provincial council, 1685, fixing the boundary line between Bucks and Philadelphia counties, Southampton and Warminster are called by their present names. But at that early day these townships were not organized subdivisions of the county, but were only settlements with English names. The report of the jury laying out the group of townships, in 1692, concludes thus: Southampton and the lands about it, with Warminster, one, which means that these two townships, with the unorganized lands adjoining, embracing Northampton and probably Warwick, should be considered one township.